What is Sickle cell disease ?

Sickle cell disease is a group of disorders that affects molecule in red blood cells (hemoglobin) that delivers oxygen to cells throughout the body. Person with this disorder have typical hemoglobin molecules called hemoglobin S, which can distort red blood cells into a sickle, or crescent, shape.

What are the symptoms of sickle cell disease?

Symptoms of sickle cell disease usually begin in early childhood. Characteristic features of this disorder include Anemia (low number of red blood cells), repeated infections, and periodic episodes of pain. The severity of symptoms varies from person to person.

The sickle-shaped cells are not flexible and cannot change shape easily. Many of them burst apart as they move through blood vessels.  Sickle cells usually last only for 10 to 20 days, instead of the normal 90 to 120 days. Body may have trouble making enough new cells to replace the ones that is lost. 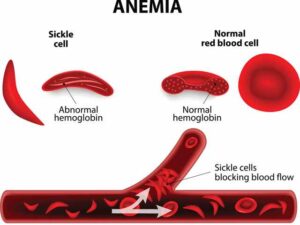 Following are the most common types of SCD:

People who have this form of SCD inherit two sickle cell genes (“S”), one from each parent. This is commonly called sickle cell anemia and is usually the most severe form of the disease.

People who have this form of SCD inherit a sickle cell gene (“S”) from one parent and from the other parent a gene for abnormal hemoglobin called “C”. Hemoglobin is a protein that allows red blood cells to carry oxygen to all parts of the body. This is usually a milder form of SCD.

There also are a few rare types of SCD:

People who have these forms of SCD inherit one sickle cell gene (“S”) and one gene from an abnormal type of hemoglobin (“D”, “E”, or “O”). Hemoglobin is a protein that allows red blood cells to carry oxygen to all parts of the body. The severity of these rarer types of SCD varies.

People who have SCT inherit one sickle cell gene (“S”) from one parent and one normal gene (“A”) from the other parent. This is called sickle cell trait (SCT). People with SCT usually do not have any of the signs of the disease and live a normal life, but they can pass the trait on to their children. Additionally, there are a few, uncommon health problems that may potentially be related to sickle cell trait

Signs and symptoms of sickle cell disease can be mild or severe enough to require frequent hospitalizations. They may include:

SCD is diagnosed with a simple blood test. It most often is found at birth during routine newborn screening tests at the hospital. In addition, SCD can be diagnosed before birth.

Tests commonly performed to diagnose and monitor patients with sickle cell anemia include:

The only cure for SCD is  Steam Cell transplantation. Because these transplants are risky and can have serious side effects, they are usually only used in children with severe SCD. For the transplant to work, the bone marrow must be a close match. Usually, the best donor is a brother or sister.

There are treatments that can help relieve symptoms, lessen complications, and prolong life:

Best Sickle cell disease treatment in India have mastered the technology for isolating maximum number of viable stem cells allogenically with the matched donor to treat various patients with SCD. There are various super specialty hospitals with the excellent, well equipped state of the art facility to isolate process and enrich the viable number of stem cells, which can be re infused back into the patient’s body. Generally, these cells are administered through any one of the below mentioned methods depending upon expert’s advice:

Thus, once infused back in the body, these cells are known to revamp the cellular system in bone marrow as well as in damaged organs. Thus, the recovery period after the transplant, is found to be between 1 to 2 months; depending upon the patient’s health, age and will power.

The collected data from various clinical trials has suggested that 85 out of 100 children have restructured body’s natural defense mechanism completely after stem cells treatment.

What is the cost of Sickle Cell disease treatment ?

Even though best sickle cell disease treatment in India modalities include medication, vaccinations or blood transfusion also, the most effective and permanent solution is a considered to be the sickle cell disease transplant, especially when it is undertaken in children. Hence the primary cost becomes valid for any person looking for a more permanent treatment for sickle cell disease. Transplanting healthy bone marrow to the bloodstream of affected person helps to develop new healthy bone marrow cells which are responsible for developing the new healthy red blood cells. Since the condition is more of a genetic nature autologous transplant is carried out. This is the type of transplant wherein the healthy stem cells from a donor is harvested to plant in the recipient who is suffering from the condition. These new cells start multiplying rapidly to replace/replenish the sickle cells in the body

The cost of best sickle cell disease treatment in India mainly depends on the source of the donor providing the healthy sickle cells. The basic criteria for identifying a potential donor is the HLA matching. First preference is for a donor with an HLA matching from the immediate family. This helps to reduce the risk of rejection. In case a donor is not identified from the family then the next choice is the bone marrow registries worldwide. In India in the absence of a matching donor from the family, the availability of HLA matching donor is first checked in the local bone marrow registry. In case the HLA matching donor has to be sourced from a worldwide registry outside India then the cost of the procedure could move upwards to 60K USD. For more information related to Best Sickle Cell disease treatment in India . Click Here…

Hi there I am…