It was a chilly winter morning in the month of July 2018 at Nairobi, the capital city of republic of Kenya. Mr. Paul Karanja who lived about 300 kilometers from Nairobi city, at a place called Eldoret, It is also called the City of Champions. Eldoret is a lovely peaceful rapidly developing city in Kenya. Mr. Karanja was requested by the doctor to come and consult regarding bone marrow aspiration results and that was the reason he travelled to Nairobi on day prior to his appointment at Kenyatta National Hospital.

The treating doctor observed some symptoms and he thought that there was a need of bone marrow aspiration. The report was truly a shock to whole of the family as he was found to have multiple myeloma, a disease which Mr. Karanja did not even know before this day. The doctor was very supportive and he set with the family and was able to calm them down as it was a panic situation for the patient and his family members.

Now, the family was restless and they started seeking for best bone marrow transplant hospitals in 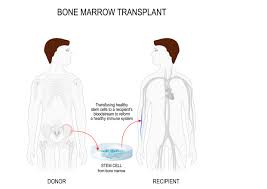 India, some were talking to people who have been in India for treatment, others were talking to friends and everyone was trying to do their self best to come up with some sort of information about best bone marrow transplant Hospitals in India. In one of the family feeling organised on a saturday evening, a lady walked and she was a distant relative of Mr. Karanja,  During the meeting, everyone was trying to contribute sharing views and ideas as to how they move ahead with the process. This old woman said she has been to India for the same treatment and she is doing perfectly well for the last 5 years post bone marrow transplant in India. It was a shock and surprise for everyone sitting in the hall. She said her family kept it confidential as they did not want others to know about her blood cancer. People in kenya take it as a death sentence when someone is diagnosed with any kind of cancer in the current times.

She confidently said to all, that you need not to look for best bone marrow transplant hospitals in India and requested everyone to leave it people who are experts. She promised to connect family with GHN Healthcare who as per her, have experience and needed expertise to help and support patients who are in need of bone marrow transplant in India.

The family was thankful to get this information and they immediately contacted the GHN Team.

The process of searching for a reputable & reliable transplant centre, getting the opinion with tentative cost of treatment, sharing of the visa Invitation letter, arrangement of airport pickup, booking of the accomodation and hand holding care services on ground were offered during their treatment journey of over 2 months in India.

T-cell lymphoma is type of  Non-Hodgkin’s lymphoma  which comes in many forms.

It often starts in the thymus (a small organ behind the breastbone and in front of the heart, which is where many T cells are made), and may grow into a large tumor in the mediastinum (the area between the lungs). This may cause trouble in breathing and swelling of arms and face.

There are different forms of Anaplastic large cell lymphoma

Systemic ALCL is divided into 2 types based on whether the lymphoma cells have a change in the ALK gene.

Symptoms vary according to the specific type of T-cell lymphoma.

Not all forms of T-cell lymphoma cause symptoms on the skin. Other types may cause:

fevers or chills with no known cause

persistent abdominal pain on the left side due to swollen spleen

TREATMENT
It is very likely to get more than one type of therapy, when people are looking for treatment, the major concern the cost of bone marrow transplant for Lymphoma.

Mycosis fungoides and Sézary syndrome may involve direct treatment on the skin as well as systemic treatment.

SKIN TREATMENTS
Certain ointments, creams, and gels applied directly to  skin can control symptoms and even destroy cancer cells.
Retinoids (vitamin A-derived drugs). Potential side effects are itching, irritation, and sensitivity to sunlight. Retinoids shouldn’t be used during pregnancy.
Corticosteroids. Long-term use of topical corticosteroids can lead to thinning of  skin.
Topical chemotherapy.  It may include redness and swelling. It can also increase the risk of other types of cancer. However, topical chemotherapy tends to have fewer side effects than oral or intravenous chemotherapies.
SYSTEMATIC TREATMENTS
Medications for T-cell lymphomas include pills, injections, and those given intravenously. Targeted therapies and chemotherapy drugs are often combined for maximum healing.

Systemic treatments may include:

Chemotherapy combination called CHOP, which includes cyclophosphamide, vincristine, and prednisone
Newer chemo drugs, such as pralatrexate (Folotyn)
Targeted drugs, such as bortezomib (Velcade), belinostat (Beleodaq), or romidepsin (Istodax)
Immunotherapy drugs, such as alemtuzumab (Campath) and denileukin diftitox (Ontak)
In advanced cases, one may need maintenance chemotherapy for up to two years.

Radiation
Radiation therapy uses radioactive particles to destroy cancer cells. The beams can be directed to the affected skin so that internal organs aren’t affected.

Extracorporeal photopheresis
This is used to treat mycosis fungoides or Sézary syndrome.  Two-day procedure, in which blood will be removed and treated with UV light and drugs that activate when exposed to the light, killing cancer cells.

Get the cheapest bone marrow transplant in India

Hi there I am…